We deliver to Delhi NCR, Jaipur, Bangalore & Mumbai Only

Now reading: Kombucha SCOBY 101: Everything You Should Know
Share
PrevNext

While you sip in the fizzy goodness of your favourite kombucha, have you ever wondered what the floaty thing is on the top of the jar it’s made in? It is called- the SCOBY. What sounds like a nickname, kombucha SCOBY is actually an acronym for Symbiotic Culture of Bacteria and Yeast. It’s slimy, thick, and super important to make the fermentation process literally come to life!

In this blog, we’ll take you through the nitty gritties of what lays behind the gooey texture and does this magic. Furthermore, we’ll answer your most asked questions and leave you with the gift of Atmosphere’s very own Kombucha Brewing Kit to bring this natural craft in your own kitchen.

So without further ado, let’s get started!

What is Kombucha SCOBY? According to the Journal of Food Science, “a Kombucha SCOBY, also known as the symbiotic culture of bacteria and yeast, is a culinary symbiotic fermentation culture consisting of lactic acid bacteria, acetic acid bacteria, and yeast which arises in the preparation of sour foods and beverages such as kombucha and kimchi.”

This rather unappealing rubbery substance is like a microorganism sheet mask to pamper and bring out the probiotic magic of any green tea. From a classic relaxer, the SCOBY does its magic for a week or so, and gives you nature’s fizzy cooler for your gut!

What is the purpose of SCOBY?

The purpose of SCOBY is to ferment any choice of green or black tea using the sugars it is mixed with. After about one to four weeks of sitting in a closed jar, the SCOBY breaks it down, leaving with you, a fizzy, acidic, and flavourful beverage.

We at Atmosphere pride ourselves on the number and quality of flavours we bring out each season for our beloved customers. This magic is simply achieved using a variety of green teas and the freshest of real fruits + herbs matched by our in-house nutritionist, wellness chef, and food technologist!

“Many people theorize that the SCOBY forms across the top of the brewing vessel to help create a barrier between the liquid and the air above it. By creating at least a bit of a “seal,” it’s an added layer of protection to prevent dirt/other bad bacteria or microbes from coming into contact with the brew.” - YourBrewKombucha 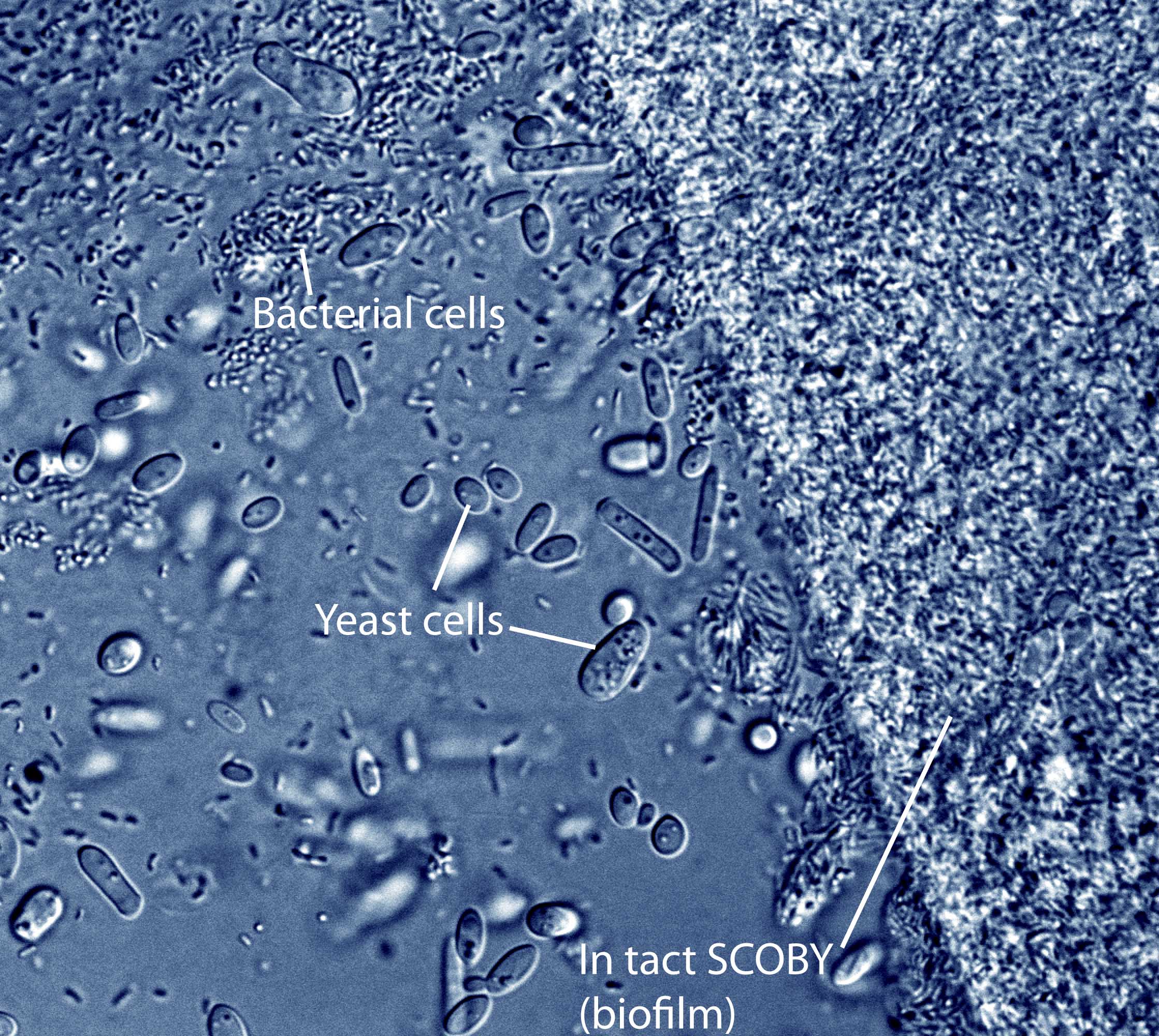 While the Kombucha SCOBY breaks down the sugars into carbon dioxide, minute alcoholic/acidity, the final product is rich in probiotics (more than 2 billion!) and gut-healing powers. The SCOBY forms a new baby layer with each batch you make and can be separated from the “mother” to make new kombucha batches each time!

As the bacteria and yeast in the SCOBY for Kombucha is active, you can absolutely consider it “alive.” A great way to check if your beloved SCOBY still working is to try it out with a new batch of kombucha you make and see how fizzy it is and how long it took to ferment!

What are some other kombucha SCOBY uses?

Can you eat the SCOBY in Kombucha (OR) What happens if you drink the SCOBY?

Yes! They’re 100% edible, chewy or rubbery, and taste like a sour vinegar-y gummy bear. If you find some pieces of SCOBY in your favourite Atmosphere booch, worry not! Some amounts of SCOBY present in your booch won’t hurt your gut and just help you further enhance the balance of your gut microbiome!

Where to buy SCOBY (India)? Did you know you could make your very own batch of kombucha with Atmosphere’s Kombucha Brewing Kit? The 8-piece set has everything you need- from a generously-sized fermentation jar to the starter liquid and SCOBY to bring in the probiotic magic! Flavour with your choice of ingredients and experiment on your personally crafted booches!

Alternatively, if you feel you’re ready to take matters in your own hands, why not start with just the SCOBY? That’s right- you can also buy kombucha SCOBY in India! Atmosphere Studio brings you the organic magic of this probiotic mat/fermentation rubber-angel at quite the bargain cost! Buy yours today and experience the craft of kombucha-making right from your kitchen.

5 Signs Of An Unhealthy Gut And How To Improve

Your Ultimate Guide To Kombucha Tea And Probiotics

You can use this element to add a quote, content...

Sign up for our newsletter and be the first to know about our latest launches, events, discounts, recipes, nutritionist advice, and more!